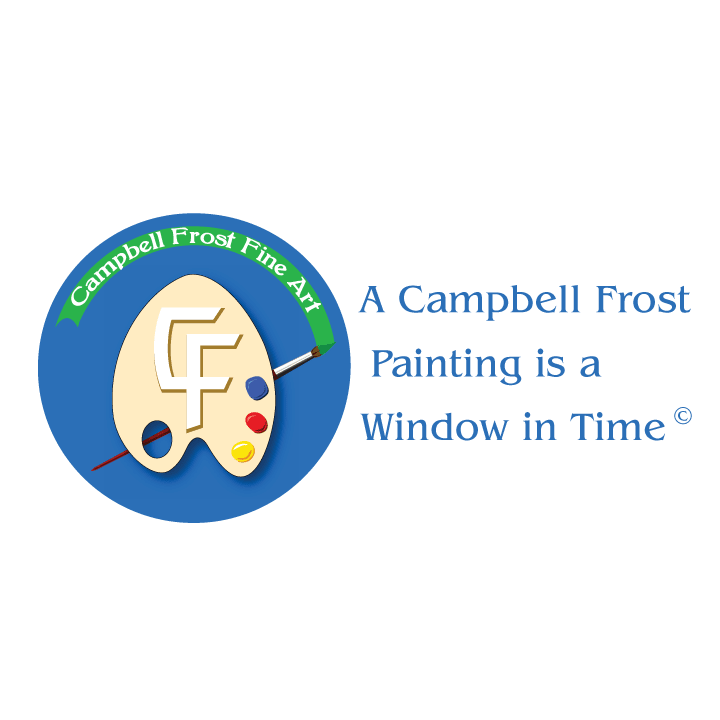 Over Six Decades of Capturing Memories on Canvas

Though he was painting long before obtaining his fine arts degree a half-century ago, until quite recently, comparatively few living people had actually seen a Campbell Frost work of art. The then-limited images available online represented mostly pieces he'd previously donated to charity auctions.

It's difficult to imagine, then, how a man who's rarely sold an original piece could make his full-time living as an artist, but that's just what Campbell has done. He's taught individuals ranging from school children to incarcerated prisoners to paint, and some of Campbell’s advanced students have undergone his tutelage for decades in area schools, colleges, and at artists' supply retail stores for decades, with the latter two serving as his primary sources of income.

Campbell’s Southern charm, quick wit, and self-deprecating humor instantly endear him to those he meets for the first time. Martha Scott Beaver, late reviews editor with South Carolina's Columbia Record newspaper once wrote "Campbell Frost is one of the best photorealism artists in the state." Campbell was selected to work a number of years with the South Carolina Arts Commission, and was invited to join the prestigious National Society for Literature and the Arts in the 1970s.

His first published piece, a pencil drawing, appeared in the nationally-syndicated “Ripley’s Believe it or Not” newspaper column in the late 1950s. Campbell was born in 1942, and has seen a literal world of changes in both art and America in the ensuring years.

Campbell has the unique ability to capture memories on canvas, and the power to draw you in, permitting you to relive happy moods and moments from bygone days.

A Campbell Frost painting really is "a window in time."

Campbell Frost has been designated as a "Trusted Seller" with The Art Storefronts Organization, which means you can shop with confidence, and know that he stands behind the quality and value of his products.

Recently capping off his seventh decade on this planet, Campbell Frost still finds inspiration in both nature and vintage, manmade, objects. His subjects range from The Appalachian mountains and the Carolina coastline to rustic architecture and aged footwear.  He specializes in evoking thoughts of happy days and places, inviting the viewer to relive memories of times shared with loved ones in days gone by.

Able to paint and draw in all traditional mediums, today, Campbell primarily teaches and paints in oils and acrylics.

As a teenager in the late 1950s, Campbell Frost's first published work of art appeared in the then-nationally syndicated Ripley's Believe it or Not newspaper column. He later obtained a Bachelor's degree in Fine Arts from the University of Tennessee, and underwent additional formal training in Louisiana and Florida, Campbell served with the South Carolina Arts Commission for many years, and was invited to join the prestigious National Society of Literature and the Arts in the 1970s. Campbell still lives, paints, and teaches in his native South Carolina.

The presence of this badge signifies that this business has officially registered with the Art Storefronts Organization and has an established track record of selling art.

It also means that buyers can trust that they are buying from a legitimate business. Art sellers that conduct fraudulent activity or that receive numerous complaints from buyers will have this badge revoked. If you would like to file a complaint about this seller, please do so here.

This website provides a secure checkout with SSL encryption.

The Art Storefronts Organization has verified that this Art Seller has published information about the archival materials used to create their products in an effort to provide transparency to buyers.

Our prints are produced on your choice of 100% cotton watercolor paper or premium canvas surfaces, in archival quality inks. With proper care, they will last for generations.

Your cart is currently empty.

This is only visible to you because you are logged in and are authorized to manage this website. This message is not visible to other website visitors.

The above preview shows how to use the live preview on this website. The image displayed is just an example, and is not available for sale.

This means you can use the camera on your phone or tablet and superimpose any piece of our art onto a wall inside of your home or business.

To use this feature, just look for the "Live Preview AR" button when viewing any piece of art on this website!

Below, select which favorite lists you would like to save this product into.

Enter your email below and we'll email you a 20% OFF Coupon right now!

This offer is valid for NEW CUSTOMERS only!